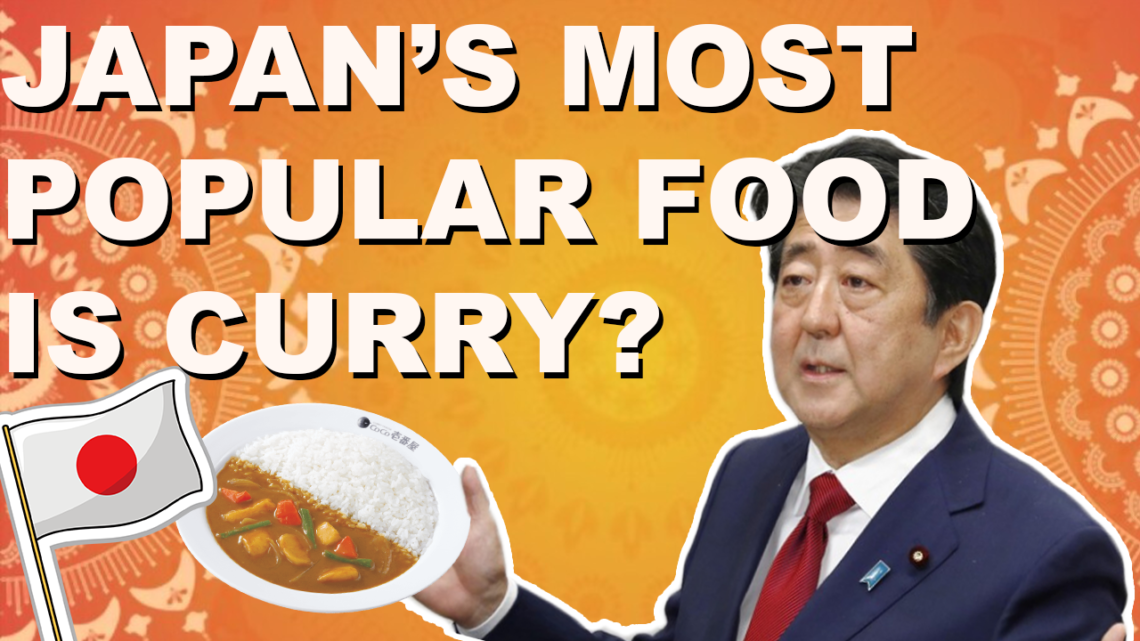 OK so the title has already given it away, this is an article about food. I am sure a lot of people are thinking isn’t this blog supposed to be about working in Japan?! Well yeah it is and we have articles on that stuff too, but let’s be honest, food is important. We can live without work but we sure as hell can’t live without food. So I think that as food is such a key part of our lives it makes sense to be passionate about it. My friends and I when we meet up, we will often talk about food and especially about the differences in availability, variety, quality of food in Japan compared to what we have experienced elsewhere.

A food that I love and briefly touched upon on one of my earlier articles in The Salaryman Diet is curry. Friggin love it. India curry, Japanese curry, Thai curry, it’s all great. I am not prejudice against my curry.

This article is actually going to be about just that, curry. I know what you’re thinking, this guy is friggin crazy, the hell do we care about curry and I am pretty sure you can’t write a full article about it. Well I won’t deny the first claim, but if there is something that I can do, it is write an article allllllllllllllll about curry. In fact during my year abroad in Sophia I did a full 30 minute presentation in Japanese about curry. I like to think the presentation changed lives in that classroom, it was groundbreaking, inspiring and as Steve Jobs would say “insanely great”.

That presentations is actually making the bases for this article (REALLY READ AS  I am just reverse translating my Japanese speech into English cause I am a genius…a lazy genius). The whole premises for the presentation is ‘If asked to name the top Japanese foods, how many people would say curry?` I honestly think that the answer would be close to zero. I mean even if I was asked this question I would have generally answered sushi, tempura or ramen as they just ‘feel’ Japanese. However when you actually talk to families, watch food commercials and probably most importantly look at the data you find out that curry is one of THE most popular and loved food in Japan. Wow pretty big claims there eh! Well let’s begin with a little bit of background. 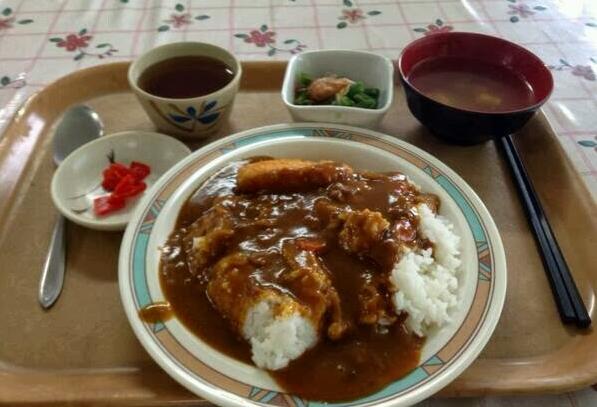 This is the curry we were served at the factory during the training period at my company. It tasted AMAZING.

Curry was first introduced into Japan by the English (who would have guessed it eh!) in the 1870s, which was during the Meji period (1868-1912) and when England colonized India. At the time, English sailors liked to eat stew but due to milk (used for seasoning apparently) not being able to keep over long journeys they used curry spice instead. Making some kind of awesome curry-stew that had meat, carrots, potatoes etc. and seasoned with curry powder.

Around the same time the Japanese navy were surviving off a diet of white rice, miso soup, and pickles which were thought to be the reason Japanese sailors came down with beriberi, the diet having a lack of vitamin B1. Thus when the English turned up with their awesome curry-stew, with plenty of vitamin B1, they decided to eat it too. Because we English like our bread, this is how the English sailors and Japanese sailors too originally ate the curry, with bread. However the Japanese ended up thickenings it up a bit and serving it with rice to cater to the Japanese palate a bit more, and thus the Curry Rice was born!

On land the first mention of curry in Japan was in a book called seiyō ryōri shinan / 西洋料理指南 (Proposed western-style menus) by Keigakudo shujin, and seiyō ryōri-tsu /  西洋料理通  (an authority on western cuisine) by Robun KANAGAKI which were published in 1872 and introduced how to make an interesting variation of the curry that was introduced by the English sailors, containing frog and spring onion. At the time the English used curry powder such as the one made by Crosse & Blackwell, but being an imported product for those in Japan it was often too expensive for the average person to buy during the Meji period.

“A guide book to western food” Cause nothing symbolizes western food more than a knife, fork and spoon!

It wasn’t until the Taisho period （1912–1926）that Japan produced its own domestic curry powder. The first was created in 1923 by Minejiro Yamazaki, who would later found S&B Foods. During the Showa period （1926–1989）  good, cheap domestic curry powder started being produced in Japan. It was especially popular in schools and military groups as it was easy to make one big batch and dish it out among hundreds of people.

One of the key developments in Japanese curry was after the war however, around 1950, when the curry roux was invented. Apparently inspired by chocolate bars, the curry roux is like a ‘mini block’ of curry containing all the necessary spices to make a mighty fine curry. All that is needed is water and the gu (ingredients). Speaking of which, as mentioned before the Japanese curry was originally based on the stew like curry that the Brits brought over, and so the Japanese curry had a lot of vegetables. Key vegetables being, onion, carrots and potatoes, which were all produced in Hokkaidao (Japan’s most north island), the government actively supporting the use of the domestic vegetable in the curry. 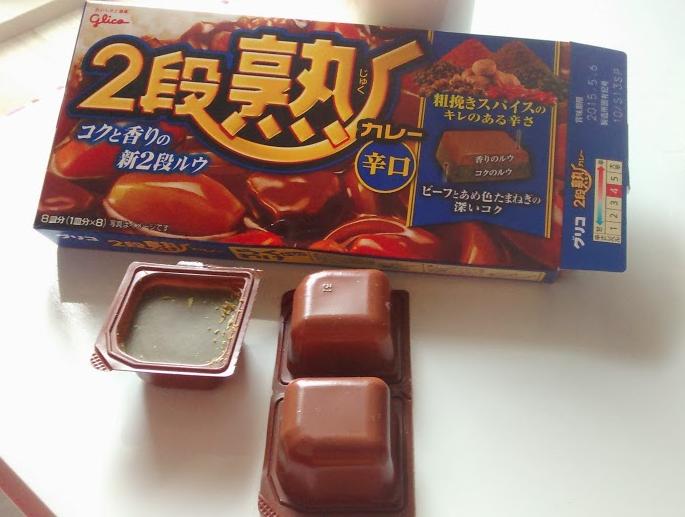 Today curry is eaten everywhere and often thought to be the most loved dish here. According to this website by one of Japan’s biggest curry makers, based on research by the government (Japanese governments do some bad ass research!) around 13.898 tonnes of curry powder was produced in 2015 which amounts for around 10 billion plates of curry! Divided by the population of Japan, then this amounts to 79.1 plates of curry per year per person, more than once a week.

Furthermore, in another survey involving more than 60,000 people and based on the theme of ‘What food do the Japanese love’, curry rice was No.2! Receiving more than 3,500 votes, beating ramen and only falling behind  rolled sushi!

Nowadays in Japan you you have curry bread, curry rice, curry udon, curry everything. A big debate among the curry lovers out there being do you mix your rice or not. An entire article was written about this subject by a website called rocket news 24. I have had the debate myself a few time with Japanese students when I was in university (happy times!) For those that are curious, I am a mixer myself. There is even a curry research center which has around 10 ‘researchers’ whose job it is to of course, research about curry! Amazing.

For those of you that are still determined that ‘curry’ rice isn’t a Japanese dish, then lets take another last look at curry 101. It may come to surprise those who are uneducated in the ways of the curry (what have you done with your life?!) that in India there isn’t actually a dish called ‘curry’. In fact, stealing the quote used by wikipedia from Collingham, Lizzie. Curry: A Tale of Cooks and Conquerors:

“No Indian, however, would have referred to his or her food as a curry. The idea of a curry is, in fact, a concept that the Europeans imposed on India’s food culture. Indians referred to their different dishes by specific names … But the British lumped all these together under the heading of curry”

In other words, you won’t really find just a ‘curry’ in India. Pretty wild eh.

Even in England while we do sell ‘curry powder’ in the stores, generally when we eat out, we don’t have ‘curry’ but order a specific dish ‘korma’, ‘balti’ or the famous British bull dog of curries ‘chicken tikka masala’. However in Japan, it is indeed just ‘curry rice’ there is no ‘balti curry rice’ here. Just like you have ‘Tempura’ that is pretty much a set flavor and recipe, so is the very Japanese curry bread, curry rice or curry udon .This doesn’t mean that they aren’t slight various in taste and ingredients however. While the bog standard definitive curry will be made of beef, onion, carrot, potato and curry roux. Every prefecture, of which there are 47, has their own local variation that might contain the prefectures meibutsu （specialty）as an ingredient. Recently they have started selling a bulk pack with 47 currys, for the hearty sum of 25,000 yen. 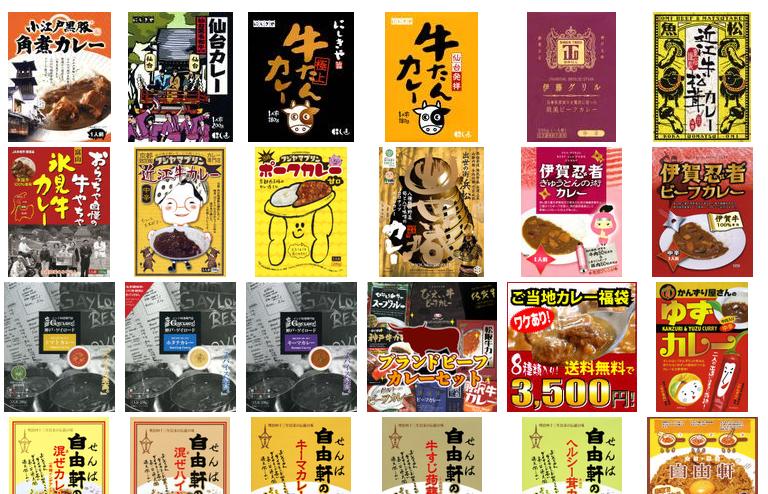 More curry than you could shake a naan bread at!

While curry might not be Japan’s oldest dish, the name is written in the foreign scripts katakana and was originally based on what the English brought over, I think it is fair to say that today it is very much a distinct and unique Japanese dish. No doubt overlooked by many visitors when they come to Japan, it is eaten and loved by thousands of Japanese citizens. So next time you think of the definitive Japanese foods, as well as sushi, ramen and tempura, please don’t forget to include curry too!

Crazy about Japanese curry too? Let me know in the comments!