Job hunting as a new graduate in Japan is a unique and confusing process. Did you know that often Japanese university students will begin their job hunting a full year before they graduate? Also companies have unique processes such as information seminars, group interviews and written exams? Some large companies such as Toyota will aim to hire more than 1,000 students every year. It is one of the most stressful times in a students life, the number of suicides due to this job hunting more than doubled since 2007 with 15% of the suicides of university students due to job hunting.

But, how did this process start and why?

Like many things in Japan, it all starts with a large Japanese company. In the 1870s The Mitsubishi Group started hiring from Keio University, followed by The Mitsui Bank in1887. Though rather than tests and interviews, people were hired mainly via introductions and referrals from the university.

After the 1st WW in 1918 the number of university students increased and from 1927 Japan entered the Showa financial crisis with the world affected by the Great Depression. This led to an excess in job seekers over positions and companies began also using employment selection tests on applicants. Due to the financial crisis and rise in job applicants, there was large unemployment as only around 30% of university graduates were employed.

From 1937, there was a demand for hiring centered around the arms industry, due to the Sino‐Japanese war. Japan was under military regime, meaning that the majority of both students and companies were not able to select independently but employment was decided by the state.

For the few companies and students exempt from the state selection, students started being enticed with higher salaries, resulting in a sudden increase in new graduate starting  salaries . But this caused the government to step in and implement a fixed first salary law in 1940 for new graduates.

After the 2nd WW Japan saw a record period of economic growth, which would make it the world’s second largest economy. Mass hiring by companies became standard practice.  The economic recovery, plus new government policies in response to the baby boomer generation, meant that there was also a large growth in university students in Japan. It also became common practice for companies to start their hiring process before students had graduated from university, in order for them to secure the best talent quicker.

While recommendation and introductions from universities to students’ employment companies were still common practice up to this point, in the late 1960s students became able to apply and get hired by companies independently. This marked the beginning of the recruitment and employment information industry in Japan.

In 1986, Japan passed new gender equality laws, creating more job options for female students. Also it was the start of Japanese bubble economy. Demand far outstripped supply and with companies fighting over the top university students. More than 50% of graduates were employed by top listed companies.

Post Bubble Period and Birth of the Modern System

The collapse of the bubble in the early 1990s brought on the ‘Employment Ice Age’ with companies cutting back on hiring. The focus was on ‘quality hiring’ which resulted in stricter selection.

This was the birth of many common practices today such as Entry Sheets, focus on reason for applying, PR and stricter interviews. Also in 1996 companies started the hiring process even earlier again, starting more than a year before graduation, targeting even 3rd year students.

Towards the end of the 1990s more companies started using diverse measures of recruitment, such as year-round recruitment, hiring by job type, trial employment, internships and hiring international students.

However due to the large increase in % of people going to university in the 1990s there was an increase in people graduating without having found full time employment, known by the term Fleeter. About 10% of high school and university graduates were not able to find steady employment in the spring of 2000.

While the increase in usage of the internet also made it easier for companies to target new graduates and in the early 2000s there was an economic recovery, the lehman shock from 2008 onwards resulted in a decrease in job openings. Companies continued their long hiring process, focusing on graduates from elite universities and overall stricter hiring process, resulting in a longer and more stressful job hunting process for students.

You can see a template of the current schedule with internships starting in June of students’ 3rd year, officially entries from March in their 4th year.

While there had been a recovery and increase in the number of positions for new graduates since the Lehman shock, due to the recent effect of COVID-19 there has been a decrease in the number of positions for the 1st time in 10 years. Thankfully though the job to applicant ratio is still 1.5 jobs for every applicant, which is higher than the period following the post bubble and lehman shock period. With 96% of graduates able to secure a job by the time they graduate.

There has also been a move to do more activities online, up to now students had been expected to physically go to seminars and attend company explanations, but many companies now do this online.   With more than 90% of companies doing some form of online employment, including the explanation, interview, test group discussion and other practices A full 60% of companies doing everything up to the final interview stage remotely. This has caused a delay in graduates getting their offer though, compared to before:

Japan is currently undergoing many challenges related to employment. With a decreasing birthrate and aging population, there has been an increase in demand for international new graduate hires.Compared to 2017, the % of companies planning to hire international students has more than doubled.

While there is still some way to go and the recent effects of COVID-19 on visa processes might limit the opportunities for international students living overseas. Due to an increase in companies using online methods for their recruitment practices as well as need to hire non Japanese graduates, it is possible that there could be more opportunities for international students to be employed in Japan going forward.

Thank you for reading this article. Please let me know your thoughts or questions in the comments below. 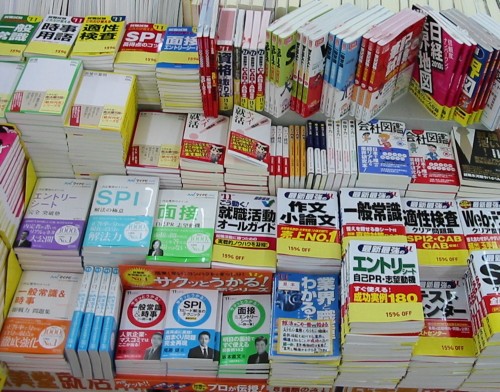 How to do Research on a Company in Japan

Internship – Oneway Ticket to a Job in Japan